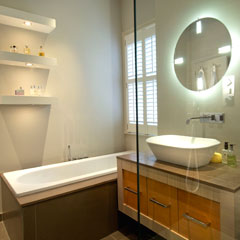 An extract from Time & Leisure January 2009

‘We are the envy of our friends,’ said Paul Raben-Christensen. ‘Our friends call round and are amazed at what we have been able to do with our house.’

Paul lives with his partner Lance in a charming terraced house in Balham. The exterior of the house has pretty architectural Victorian features that give the house a charm and elegance that reflect the area. The inside of the house also has similar period features such as a beautiful marble fireplace in the sitting room, a pretty tiled entrance floor and sculptural banisters leading up to the first floor.

When they first moved in, their original problems were that the house lacked space and was stuck in inelegant 50s design with traces of Victoriana. ‘We wanted to do something with the house – namely utilize the side return at the back of the house and possibly a small kitchen extension – but when we approached local builders they came up with quite routine solutions to our problems. Also, we knew that because of the demands of our work life, we would be unable to monitor the work and we would most likely end up with an unsatisfactory solution. Eventually we approached the interior design company Bicknell Interiors. This was the best thing we ever did,’ Paul said. ‘It started a relationship that lasted over two years. They looked at our house with new eyes. Not only did they look at the problems we lived with but also at the advantages the house offered and the way they could utilize the many delightful features that existed. They created a project that not only looked at our kitchen, which was the original concept, but also the whole of the house and how it could be made both fashionable and more adapted to our life style. They handled everything. We moved out of the house and lived at my brother’s while the major work was going on to give the builders free range,’ Paul said,’ ‘but they always consulted with us. They paid great attention to detail – they even saw to the hanging of the pictures in the final stages.’

As we sat in the kitchen, Paul (who has Scandinavian roots and was keen that the house should reflect his ancestry) explained: ‘I like the Scandinavian style, it’s light and airy and has a certain ageless feel about it. The style quietly permeates the whole house.’ The kitchen acts as a centre of the house and provides a comfortable seating area with space for a large dining table. From the kitchen, the doors lead out to a well planned and low-maintenance garden that faces west and in summer gives an extension to the house. ‘It’s great when we entertain,’ he said. ‘I can carry on cooking and still be part of the party.’ Paul was full of praise for the kitchen units that had been fitted. ‘Not only do they look nice but they are of a high quality.’ He demonstrated the coffee making machine producing immaculate coffee for us both.

At this stage, I was joined by Chris Bicknell, Creative Director who leads the design team. He took me on a tour of the house. The sitting room has been knocked through from what was the old dining room, previously a bit of a dumping ground for bikes and boxes. The door that had previously led out to the garden now led to a small courtyard (‘a smoker’s retreat,’ I joked). ‘We left this door with access to the outside so that it could create a draught of fresh air that will ventilate the sitting room,’ Chris explained. This is a detail that is often missed when kitchen extensions enclose the whole of the rear of the house and cut off any through draught.

Quite often a room that starts its life as two rooms never quite convinces as being one unit. Bicknell Interiors had solved this by designing a beautiful mahogany, fitted wall unit that succeeded in masking the join in the room. The flat screen TV is on a bracket from the unit and can be adjusted for viewing from any part of the room. The decorative Victorian cornice gave the room an elegance reminiscent of an earlier age.

The entrance hall, as I mentioned before, boasts a delightful Victorian tiled floor that is both practical and decorative. The gentle hall wall lighting shows off the original Victorian arches and decorations to their best.

Upstairs the attention to detail and design continued with carefully chosen wallpapers that set the mood for each bedroom. I particularly liked the way that the small cot room had been adapted as an office space for Lance. Mahogany wall units had been specially designed to save space and add a degree quality to the room.

It is evident that the clients, Paul and Lance, were entirely satisfied with the way the house had been redesigned. It was equally evident that the design team had devoted a great deal of time, energy and love to the whole project.